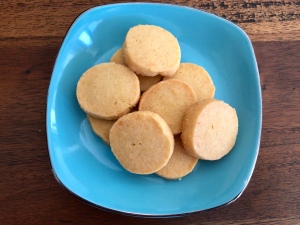 Although I’m rarely tempted by sweets (despite the amount of baking that I do), I have difficulty resisting cheese and biscuits. These days, however, cheese doesn’t like me as much as I like it – although that’s getting a tad into too much information territory.

It stands to reason then, that I’d have difficulty resisting these parmesan shortbreads. They have all the buttery yumminess of a proper shortbread, but with the sharpness of parmesan cheese. Cheese and biscuits in a biscuit. Now, that’s my idea of multi-tasking.

I first came across these little morsels in a Scottish recipe book some years ago. The recipe was super easy: 75g parmesan, 75g butter, 75g plain flour and a little salt to taste. Over the years I’ve found other versions that use extra butter and extra flour that, not only makes these go a little further but makes them shorter in texture. Nigella goes one step further and adds a single egg yolk. It adds a layer of richness that I think makes a good biscuit taste even better.

It’s, therefore, her recipe – from Nigellissima that I’ve made my own.

These biscuits go really well with drinks. Santa likes to nibble on them with a decent whisky in his hand…coincidentally, so do I. I’m also rather partial to them with champagne…or without champagne…

I write, I bake, I chase sunrises. View all posts by Jo

Slipping Through My Fingers 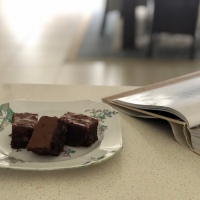